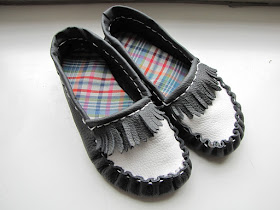 THE WIFE: Hubby! Got your work-Sunday over with well?

THE HUSBAND: Yes, long, but fine. And you? What did you do all day?

THE WIFE: I made shoes.

THE HUSBAND: What do you mean, you made shoes?

THE WIFE: The ones I'm wearing right now. I just made them.

THE HUSBAND: What? No way! Really?! (He is truly impressed, but along with that, there is also a slight undertone of excitement about the fact that she might stop spending so much money on shoes in the future...) 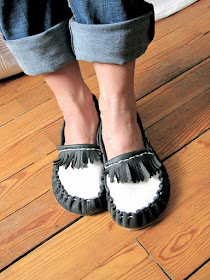 Sorry if I'm making a big drama out of this, but I've been wanting to make street-shoes for such a long time, and I finally did, and they turned out really pleasing. So bear with me, ok? :-)

Some of you might remember my earlier tries at making shoes. I have always meant to get back to it, and my mind has been pre-occupied with it a lot. HERE is a first post on making shoes, and a second one HERE with a how-to for braided shoe soles.
Since the last shoe-post I have been hunting for materials and - much more difficult - literature on the subject. One of my lasts still has the same half-shoe attached to it as almost a year ago: 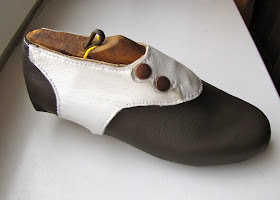 Trouble is: I'd need a heel. Heels are difficult to get, make and attach. So I'm stuck. I finally decided I needed to start smaller. And that's where the moccasins come in.

HERE'S HOW TO MAKE THEM:

By the way, I made them in one single day. You should probably do this first step one day in advance though, so the leather can dry again...

First you need a fairly thick leather for the soles. I found mine at a flea market, it is not a good quality, but for my first tries it will do. It has stains and all. It's about 3mm (1/8 inch) thick. A little thicker would be better.
Cut out a very rough outline of your foot and soak it in water. This will make it a lot softer and easier to cut out precisely afterwards. Also cut some pieces for the heels and soak them as well. 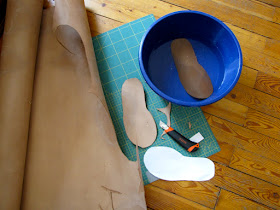 Draw the outline of your foot on a piece of paper, making sure you are always holding the pencil perpendicular to the paper.
Then draw the outline of your sole based on your foot. You can take away some width at the instep, as you see in the picture below.
Draw a line through the center of your heel and through approximately your second toe. Then draw a line square to the first line, at the height where you'll want your flap: 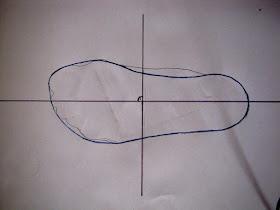 Now step onto your drawing with a string under your foot. Hold the string over your foot and mark where you'll want the sides of your shoes to go to: 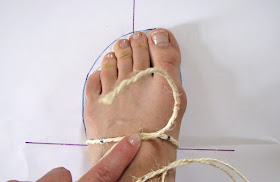 Then you lay the string out flat and transfer the mark to the paper pattern. Do that in several places and connect the dots. Mine came out this way (the slight curve at the height of the ankle had to be corrected and smoothed out later): 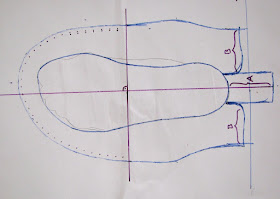 Cut it out and "try it on". In my case I decided to add some length to the heel part, just to be on the safe side. It was shortened again later: 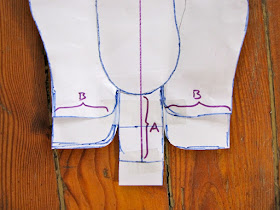 This is your main pattern piece. Cut out your upper leather (I found a big box of leather scraps in different colors on Ebay...). I used a regular crafting knife. A rotary cutter works brilliantly too, but don't use the same one you want to use for fabric again later... Always remember to cut one left and one right side... 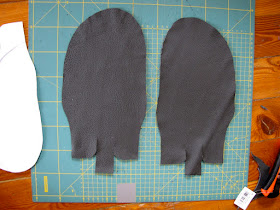 Transfer the pattern for the sole onto a separate piece of paper and cut out. Now use the soaked leather for the soles and cut two soles and several heel-parts (I used three per shoe). 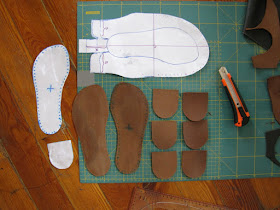 Use sandpaper to make the surfaces of the leather rough. It will be holding together so much better that way! 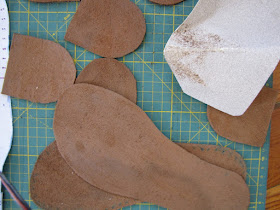 Use great glue. Glue made for shoes and leather. Read the package. Mine had to be applied to both surfaces, then let dry for about 15 minutes, then glued together and hammered. Not how long you hold it together, but how hard you hammer will decided how well it will be glued!
Glue the heel pieces together, and glue the soles to the outside of your upper leather. Be careful with the correct placement, it is crucial to get it right: 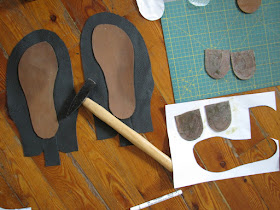 Now I used a hole-puncher and sewed the soles to the upper leather. Using a leather needle would actually be better, as the shoes would then stay water-proof. Leather "mends" again after going through it with a needle and closes up entirely. Obviously that isn't the case if you make holes. My leather needle has a very small eye though, no way I could have fit a big enough string through it.
Use heavy duty string. Ideally, you would wax it, too. Mine is special string for shoe-making... 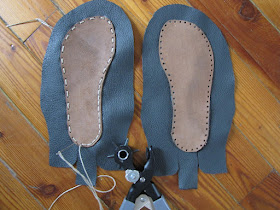 Next I cut out an inner sole, transferring my pattern to store-bought insoles, which I then wrapped in fabric. I only laid them into the shoes, but you could glue them if necessary: 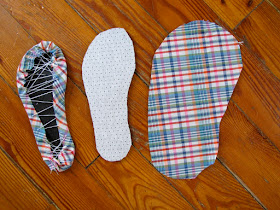 Punch the holes around the toe-part of the upper. Mine are 1 cm apart (3/8 inch). It has to be an even number of holes, so the string doesn't go in at the bottom and come out on top... 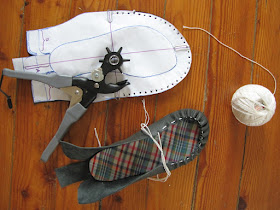 Pull a string through and put on your shoe. If you had made the sides higher than me, they could be worn like this as sandals. I wanted to make a flap though. Stick a piece of paper in place of the flap and draw the pattern, marking the holes and calculating in the extra "seam allowance" needed... 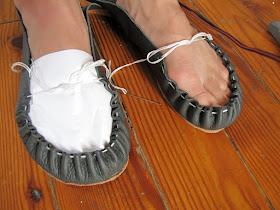 This is what my pattern piece looked like. I had drawn the line with the little marks while wearing the shoe, then I drew in the dots afterwards - that is where the holes really had to be: 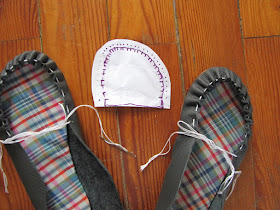 After taking the string back out and attaching the flap, you adjust the back. Hold it tightly to your foot and mark a line through the center of your heel. 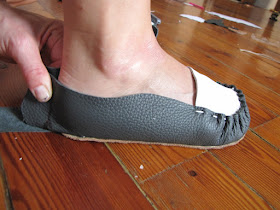 Roughly sew together the two side parts, which you have cut back to the line. Then with nicer stitches attach the heel flap over it. I did this with a leather needle, not by punching holes. If it is long, you could even fold it over to the inside. I didn't, as I was going to put another leather stripe over that edge anyway: 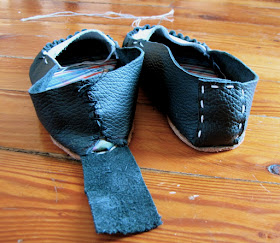 The shoes are basically done now and could be worn. I added some fringe to the front and enhanced the side edge with another stripe of leather. Both pattern pieces were made while wearing the shoes and holding/folding paper to them. In the photo below you see what they looked like (the fringe-piece is already torn apart a bit...). You also see how I attached the leather stripe with paperclips first, then punched the holes through all three layers at once before pulling the string through: 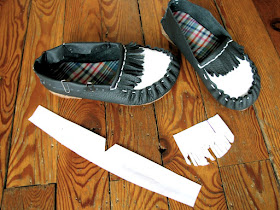 Finally I used a dremel to smooth out the heel-sides. Be careful not to touch the outer leather of the shoe though: 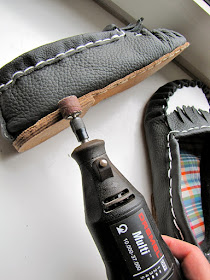 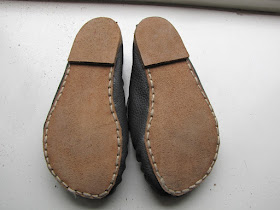 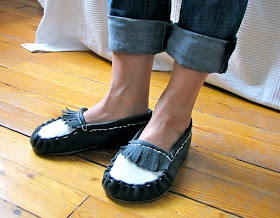 I have to buy some rubber soles to protect the leather and make sure the seam doesn't get torn from the asphalt. In the meantime, I cut a cabinet-drawer-non-slip-inset-mat-thingy to the shape of the soles and glued it. It was still wet in the picture and doesn't look nice, but at least I can go try out these shoes on the street now! :-) 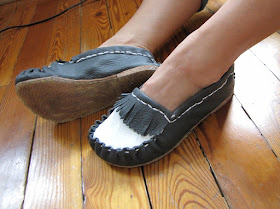 They are AMAZINGLY comfortable. After all, they have been custom-made for my feet. I will never take them off again. Maybe for sleeping and taking showers. Other than that, I don't think so...

Here is the overview of all the pattern pieces that were needed... 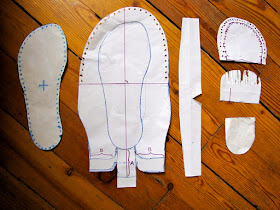 The pattern can be varied endlessly, making no flaps but higher sides, making the flap higher etc, etc... 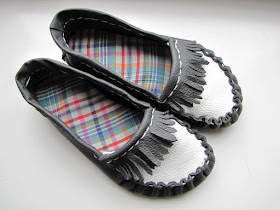 Of course you could go wild with beading and embroidery... 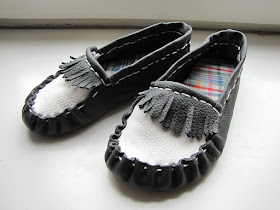 By the way, welcome all my new readers! I am thrilled to have you aboard and I hope to keep delivering interesting posts. As you see, sometimes there is a long time between them, but I'd rather have a lot of content than a lot of posts.

My near-future projects are on more shoe-making, as well as recycling clothes, coming up with my own patterns for new clothes and the vintage dress I am about to finally start (the blue one with the jacket in the picture below...). Also, I keep working on my fashion illustration skills, so hopefully some posts on that are going to follow sometime soon, too. 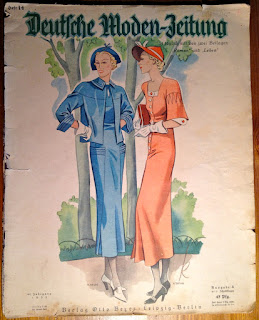 Have a grand week - see you soon with a free pattern!
Best,
Katja
Unknown um 10:58 AM
Share